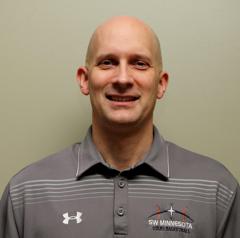 Director and Head 16U Coach

PERSONAL:
Ryan has been married to Jenifer since 1994. They have three sons, Zachary (21), Collin (19), and Tyson (16). Ryan is currently an engineering supervisor at Daktronics in Brookings, SD. Ryan enjoys spending time with his family doing a variety of activities including bike rides, playing with our Vizsla Ruby, home improvements, technology, exercise, enjoying outdoors, and watching sports. He personally has a passion for youth ministry including short term mission trips for seven summers in a row. He has been coaching basketball in some capacity for last eighteen years from middle school through college level.

PERSONAL:
Bruce has been married to Linda since 1990.  They have three wonderful children, son Austin has graduated and played at Augustana University, daughter Morgan is attending college, and daughter Lexi is a sophomore at University of Sioux Falls.  All three children are basketball players, so Bruce & Linda spend a lot of time in a gym…and they love it.  Bruce has worked for The Schwan Food Company for 25 years and is currently responsible for the Industrial Sales division.   Bruce and Linda’s foundation is their faith and they enjoy volunteering to mentor youth in the Marshall community.  Bruce enjoys spending time with his family, golfing, and biking (motor biking).
EXPERIENCE:
SW Minnesota Stars Coach (2014-Present)
Southwest Slam AAU Coach (2009-2011)
Youth basketball coach (2002 – 2012)
Assistant coach for youth basketball camps

Justin has also served as head and assistant coach for the Southwest Minnesota Stars AAU basketball program and also assisted with the Roosevelt High School basketball program in the summers of 2011 and 2012. He was an assistant varsity and head junior varsity coach at Baltic High School during the 2011-12 season. A four-year member of the basketball team at Dordt College, Van Kooten is also a part-time basketball specialist at Sanford POWER TIBBS Basketball Academy.

PERSONAL:
The Pella, Iowa native graduated from Dordt in May of 2010 with a bachelor’s degree in Business Administration.

Jeff is married to his wife Kari and lives in Tyler, MN with our three sons: Cooper, Carter, and Camden.  Jeff enjoys spending time with his family, working with youth, coaching, and playing golf.  Jeff is currently Middle School Assistant Principal at Marshall.  Jeff received his Bachelor of Science from SMSU in Elementary Education and his Master's Degree from SMSU in Special Education.

PERSONAL:
Brian grew up in Adrian, MN where he graduated in 2009.  We want onto play basketball and golf at Northwestern College in Orange City, IA.  He later transferred to University of Sioux Falls to graduate with a Bachelor's Degree in Business Management.  Currently, Brian lives in Sioux Falls and works at Citibank as a high value sales specialist since 2011.  In his free time, he continues to play golf in summer along with basketball and bowling leagues during the winter.

PERSONAL:
Luke grew up in the small rural northwest town of South Range, WI and graduated from Northwestern High School in Maple, WI in 2014.  Luke was a letter winner in both Football and Basketball. Luke attended University of Wisconsin-Green Bay as a freshman and served as a student manager for the Men's Basketball team who earned a NIT tournament bid that year. He transferred to the Southwest Minnesota State in the fall of 2015 and his degree in Social Science Education. Luke currently live in Slayton, MN where he is currently Head Coach of Murray County Central Girls Basketball and assistant with Rebels Football program. In Luke's free time, he enjoys spending time with family, hunting, fishing, and golfing.

PERSONAL:
Jared is from Blaine, MN and is son of Scott and Nichelle Kaul.  Jared has two younger brother in Jason and AJ.  Jared comes from a basketball family.  He is a nephew of Ryan Bowen who played for the Iowa Hawkeyes and had a 10 year career in the NBA.  Jared is a 3 year letter winner in basketball from Blaine High school and played aau for the Minnesota Heat. Jared is currently the student coach at SMSU for the men’s basketball program under Coach Brad Bigler.  He plans to major in secondary math education with a minor in coaching. His foundation is in Christ and enjoys hanging out with family and friends and watching any kind of basketball.

PERSONAL:
Austin is the son of Bruce and Linda Saugstad.  He has two sisters;  Morgan is junior in college while Lexi is a freshman at University of Sioux Falls.   Austin is currently a senior, pre-med major at Augustana College in Sioux Falls, SD.  He is a member of the Augustana basketball team, which just won NSIC Regular Season and National Tournament Championship in 2016.   Austin’s foundation is his faith and he enjoys hanging out with friends, talking politics, playing hoops, and umpiring baseball.